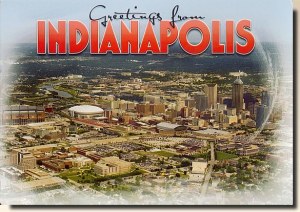 A postcard from Indianapolis, IN (Walt)

Indianapolis, often abbreviated Indy, is the capital of the U.S. state of Indiana, and the county seat of Marion County, Indiana. For much of its history, Indianapolis has oriented itself around government and industry, particularly manufacturing. Today, Indianapolis has a much more diversified economy, contributing to the fields of education, health care, and finance. Tourism is also a vital part of the economy of Indianapolis, and the city plays host to numerous conventions and sporting events. Of these, perhaps the most well known is the annual Indianapolis 500. Other major sporting events include the Brickyard 400 and the Men's and Women's NCAA Basketball Tournaments