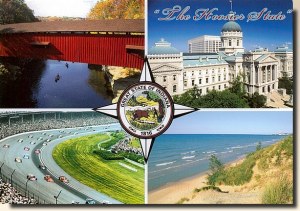 A postcard from Elkhart, IN (Denise)

Indiana is a U.S. state, admitted to the United States as the 19th on December 11, 1816. It is located in the Midwestern United States and Great Lakes Region. Its capital and largest city is Indianapolis, the second largest of any state capital. Residents of Indiana are known as Hoosiers. The derivation of the term is disputed, but one hypothesis has "Hoosier" originating from a frontier greeting, a corruption of "Who's here?". The state's name means "Land of the Indians", or simply "Indian Land". This name itself dates back to at least the 1760s, but was first applied to the region by Congress when the Indiana Territory was incorporated in 1800, separating it from the Northwest Territory.