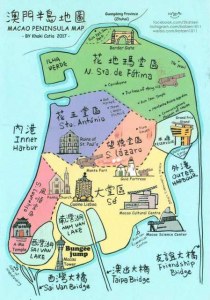 A postcard from Macau (Khaki)

About this postcard
Macau, also spelled Macao, is an autonomous territory on the western side of the Pearl River Delta in East Asia. Macau was administered by the Portuguese Empire and its inheritor states from the mid-16th century until late 1999, when it constituted the last remaining European colony in Asia. Portuguese traders first settled in Macau in the 1550s. In 1557, Macau was leased to Portugal from Ming China as a trading port. The Portuguese Empire administered the city under Chinese authority and sovereignty until 1887, when Macau, through a mutual agreement between the two countries, became a colony. Sovereignty over Macau was transferred back to China on 20 December 1999. The Joint Declaration on the Question of Macau and Macau Basic Law stipulate that Macau operate with a high degree of autonomy until at least 2049, fifty years after the transfer.