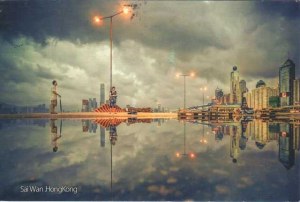 A postcard from Hong Kong (Ellen)

About this postcard
Sai Wan Ho is a primarily residential area on the northeastern shore of Hong Kong Island, Hong Kong, between Quarry Bay and Shau Kei Wan. It is part of the Eastern District, and is administered together with surrounding areas under the Eastern District Council. Sai Wan Ho is primarily residential. The hill was once filled with squatter settlements, which were later demolished and replaced with new residential buildings. Private housing estates were built near the new sea front, like Lei King Wan, Les Saisons and Grand Promenade. However, older buildings such as Tai On Building still remain further inland. These postcard contains three unique stamps from 1997, when Hong kong was still a british colony.