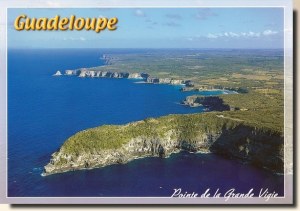 Pointe de la Grande Vigie is the northernmost polint of the island of Grande-Terre in Guadeloupe, and as such is also the northernmost point of Guadeloupe as a whole. Guadeloupe is an archipelago located in the eastern Caribbean Sea, with a land area of 1,628 square kilometres (629 sq. mi). It is an overseas department of France. As with the other overseas departments, Guadeloupe is also one of the twenty-six regions of France (being an overseas region) and an integral part of the Republic. As part of France, Guadeloupe is part of the European Union; hence, as for most EU countries, its currency is the euro. However, Guadeloupe does not fall under the Schengen Agreement. The prefecture of Guadeloupe is Basse-Terre [wikipedia]. Link: [Official website]