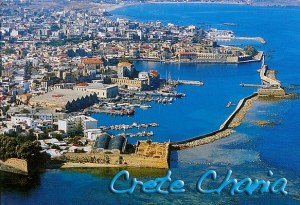 A postcard from Chania (Aris)

Chaniá also transliterated Chania, Hania, and Xania, is the second largest city of Creteand the capital of the Chania peripheral unit. Chania is the site of the Minoan settlement the Greeks called Kydonia, Greek for quince. Some notable archaeological evidence for the existence of this Minoan city below some parts of today's Chania was found by excavations in the district of Kasteli in the Old Town. This area appears to have been inhabited since theNeolithic era. The city reemerged after the end of the Minoan period as an important city-state in Classical Greece, one whose domain extended from Chania Bay to the feet of the White Mountains.