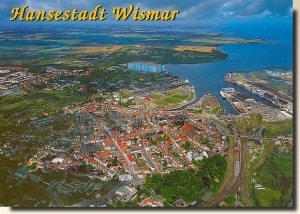 A postcard from Wismar (Witti)

Wismar is a small port and Hanseatic League town in northern Germany on the Baltic Sea, in the state of Mecklenburg-Vorpommern, about 45 km due east of Lubeck, and 30 km due north of Schwerin. Its natural harbour, located in the Bay of Wismar is well-protected by a promontory. The population was 45,414 in March 2005, more than doubled from 21,902 in 1905. Representative of Hanseatic League city brick construction as well as the German brick churches, the city has been included in the UNESCO list of World Heritage Sites since 2002. The town was the setting of the 1922 vampire movie Nosferatu (in the film however, the town is named "Wisborg").