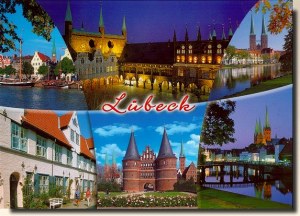 A postcard from Lubeck (Grit)

The Hanseatic City of Lubeck is the second largest city in Schleswig-Holstein, in northern Germany, and one of the major ports of Germany. It was for several centuries the "capital" of the Hanseatic League ("Queen of the Hanse") and because of its Brick Gothic architectural heritage is on UNESCO's list of World Heritage Sites. Situated at the Trave River, Lubeck is the largest German port on the Baltic Sea. The old part of the town is an island enclosed by the Trave.