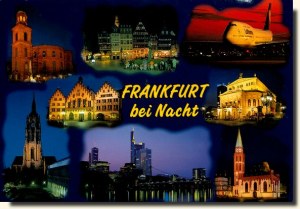 A postcard from Frankfurt (Natascha)

Frankfurt am Main commonly known simply as Frankfurt, is the largest city in the German state of Hesse and the fifth-largest city in Germany. The city is at the centre of the larger Frankfurt/Rhine-Main Metropolitan Region which has a population of 5,600,000 and is Germany's second largest metropolitan area. In English, this city's name translates to "Frankfurt on the Main" (pronounced like English mine or German mein). The city is located on an ancient ford on the river Main, the German word for which is "Furt". A part of early Franconia, the inhabitants were the early Franks. Thus the city's name receives its legacy as being the "ford of the Franks"