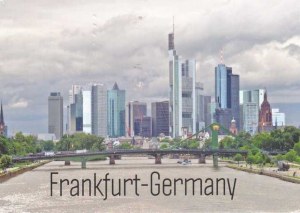 A postcard from Frankfurt (Elsa)

About this postcard
Frankfurt (officially: Frankfurt am Main) is a metropolis and the largest city of the German federal state of Hesse, and its 746,878 (2017) inhabitants make it the fifth-largest city of Germany after Berlin, Hamburg, Munich, and Cologne. It is the site of many global and European corporate headquarters. Frankfurt Airport is among the world's busiest. Frankfurt is the major financial centre of the European continent, with the headquarters of the European Central Bank, German Federal Bank, Frankfurt Stock Exchange, Deutsche Bank, DZ Bank, KfW, Commerzbank, several cloud and fintech startups and other institutes.