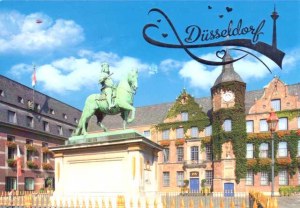 A postcard from Dusseldorf (Jasmin)

About this postcard
Düsseldorf is the capital and second-largest city of the most populous German federal state of North Rhine-Westphalia after Cologne, as well as the seventh-largest city in Germany, with a population of 617,280. At the confluence of the Rhine and its tributary Düssel, the city lies in the centre of both the Rhine-Ruhr and the Rhineland Metropolitan Regions with the Cologne Bonn Region to its south and the Ruhr to its north.