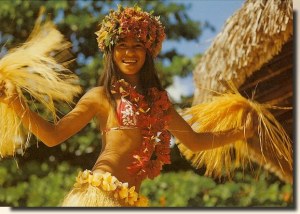 A postcard from Tahiti (Léone)

Tahiti is the largest island in the Windward group of French Polynesia, located in the archipelago of Society Islands in the southern Pacific Ocean. The island had a population of 178,133 inhabitants according to the August 2007 census. This makes it the most populous island of French Polynesia, with 68.6% of the total population. The capital is Papeete, on the northwest coast. Tahiti has also been known as O'tahiti.