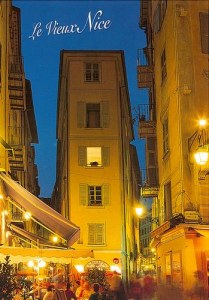 A postcard from Nice (Yves)

Nice is the fifth most populous city in France, after Paris, Marseille, Lyon and Toulouse, with a population of 348,721 within its administrative limits on a land area of 71.92 km2 (28 sq mi). Located on the south east coast of France on the Mediterranean Sea, Nice is the second largest French city on the Mediterranean coast. The city is nicknamed Nice la Belle (Nissa La Bella in Niçard), which means Nice the Beautiful – it is also the unofficial anthem of Nice, written by Menica Rondelly in 1912. Nice is the capital city of the Alpes Maritimes department, and the second biggest city of the Region Provence-Alpes-Côte d'Azur after Marseille.