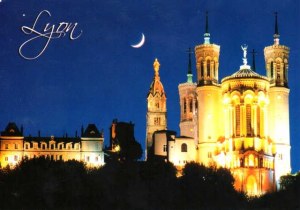 A postcard from Lyon (Amélie)

About this postcard
The Basilica of Notre-Dame de Fourvière (French: Basilique Notre-Dame de Fourvière) is a minor basilica in Lyon. It was built with private funds between 1872 and 1884 in a dominant position overlooking the city. Fourvière is dedicated to the Virgin Mary, to whom is attributed the salvation of the city of Lyon from the bubonic plague, the Black Death, that swept Europe in 1643. Each year in early December (December 8, day of the Immaculate Conception), Lyon thanks the Virgin for saving the city by lighting candles throughout the city, in what is called the Fête des Lumières or the Festival of Lights.