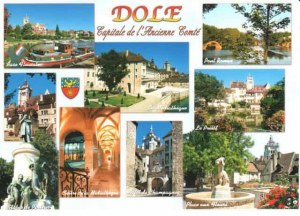 A postcard from Dole (Sophie)

About this postcard
Dole is a commune in the Jura department in the Franche-Comté region in eastern France, of which it is a subprefecture (sous-préfecture). Dole was the capital of Franche-Comté until Louis XIV conquered the region; he shifted the parlement from Dole to Besançon. The university, founded by Duke Philippe le Bon of Burgundy in 1422, was also transferred to Besançon at that time. In January 1573, Gilles Garnier was put to death after being found guilty of lycanthropy and witchcraft. He had confessed of murdering and cannibalizing four young children.