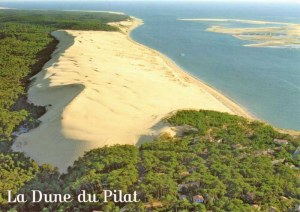 A postcard from Biscarosse (Ninon)

About this postcard
The Dune of Pilat (French: Dune du Pilat), also called Grande Dune du Pilat, is the tallest sand dune in Europe. It is located in La Teste-de-Buch in the Arcachon Bay area, France, 60 km (37.2 mi) southwest of Bordeaux. With more than two million visitors per year, the Dune of Pilat is a famous tourist destination. The dune has a volume of about 60,000,000 m³, measuring around 500 m wide from east to west and 2.7 km in length from north to south (1.35 km2). Its height was 106.60 m above sea level as of 2018. The dune is considered a foredune, meaning a dune that runs parallel to a shoreline, behind the high tide line of a beach. The dune has been observed to move landward, slowly pushing the forest back to cover houses, roads and portions of the Atlantic Wall. To back this evidence of coastal movement, maps from 1708 and 1786 both place areas with the name Pilat to the south and off-shore of the current dune's location. The area where the dune currently stands was referred to as "Les Sabloneys", or "The New Sands", until the 1930s, when it was renamed by real estate developer Daniel Meller as the Dune of Pilat. Pilat originates from the Gascon word Pilhar, which refers to a heap or mound.