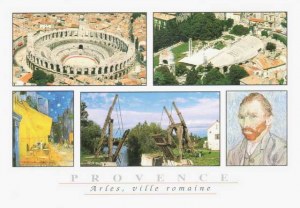 A postcard from Arles (Frede, Ema and Fred)

About this postcard
Arles is a city and commune in the south of France, in the Bouches-du-Rhône department, of which it is a subprefecture, in the former province of Provence. A large part of the Camargue is located on the territory of the commune, making it the largest commune in Metropolitan France in terms of territory (though Maripasoula, French Guiana, is much larger). The city has a long history, and was of considerable importance in the Roman province of Gallia Narbonensis. The Roman and Romanesque Monuments of Arles were listed as UNESCO World Heritage Sites in 1981. The Dutch post-Impressionist painter Vincent van Gogh lived in Arles from 1888 to 1889 and produced over 300 paintings and drawings during his time there. An international photography festival has been held in the city since 1970.