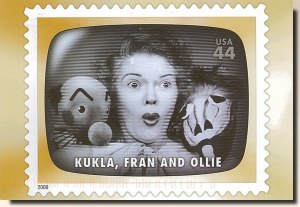 Kukla, Fran and Ollie is an early American television show using puppets, originally created for children but soon watched by more adults than children. It did not have a script and was entirely ad-libbed. It first aired from 1947–1957. Burr Tillstrom was the creator and only puppeteer on the show, which premiered as the hour-long Junior Jamboree locally on WBKB in Chicago, Illinois, on October 13, 1947. The program was renamed Kukla, Fran and Ollie (KFO) and transferred to WNBQ (the predecessor of Chicago's WMAQ-TV) on November 29, 1948. The first NBC network broadcast of the show took place on January 12, 1949. It aired from 6–6:30 p.m. Central Time, Monday through Friday from Chicago.