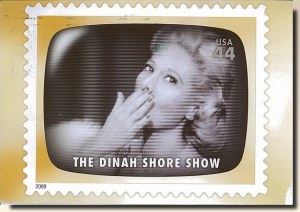 The Dinah Shore Show is an American variety show which was broadcast by NBC from November 1951 to January 1956, sponsored by General Motors' Chevrolet division. For most of the program's run, it aired from 7:30 to 7:45 Eastern Time on Tuesday and Thursday nights, rounding out the time slot which featured the network's regular evening newscast (John Cameron Swayze's Camel News Caravan), which, like all such programs of the era, was then only 15 minutes in length.