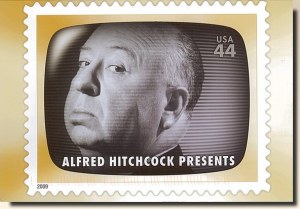 A postcard from Melbourne, FL(George)

Sir Alfred Joseph Hitchcock, KBE (13 August 1899 - 29 April 1980) was an English filmmaker and producer. He pioneered many techniques in the suspense and psychological thriller genres. After a successful career in his native United Kingdom in both silent films and early talkies, Hitchcock moved to Hollywood. In 1956 he became an American citizen while remaining a British subject.