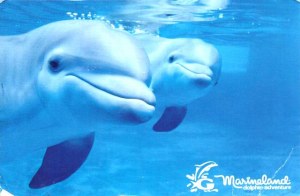 Marineland of Florida (usually just called Marineland), one of Florida's first marine mammal parks, is billed as "the world's first oceanarium". Marineland functions as an entertainment and swim-with-the-dolphins facility, and reopened to the public on March 4, 2006.