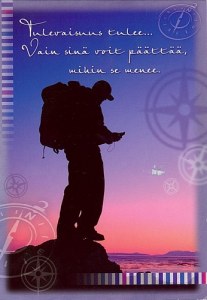 A postcard from Vaasa (Paula)

Vaasa (Swedish: Vasa) is a city on the west coast of Finland. It received its charter in 1606, during the reign of Charles IX of Sweden and is named after the Royal House of Vasa. Today, Vaasa has a population of 59,670. The city is bilingual with 69.8% of the population speaking Finnish as their first language and 24.8% speaking Swedish. The city is an important centre for Finland-Swedishculture.