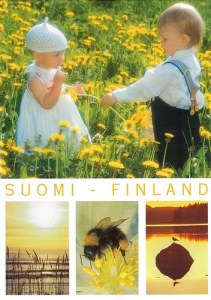 A postcard from Joensuu (Muusa)

The city of Joensuu, which was founded by the Czar Nicholas I of Russia in 1848, is the regional centre and the capital of North Karelia. During the 19th century Joensuu was a city of manufacture and commerce. When in 1860 the city received dispensation rights to initiate commerce, former restrictions against industry were removed and the local sawmills began to prosper and expand. Water traffic was improved by the building of the Saimaa Canal. Consequently, a lively commerce between the regions of North Karelia, St.Petersburg and Central Europewas enabled. At the end of the 19th century Joensuu was one of the largest harbour cities in Finland.