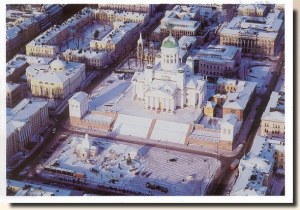 A postcard from Helsinki (Tsuuri)

Helsinki Cathedral (Finnish: Helsingin tuomiokirkko) is an Evangelical Lutheran cathedral of the Diocese of Helsinki, located in the centre of Helsinki, Finland. The church was originally built as a tribute to the Grand Duke, Nicholas I, the Tsar of Russia and until the independence of Finland in 1917, it was called St. Nicholas' Church.