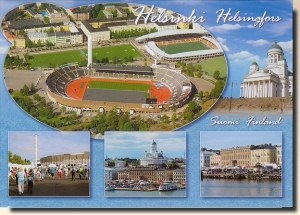 A postcard from Helsinki (Eeva 'Snowfriend')

Helsinki is the capital and largest city in Finland. It is in the southern part of Finland, on the shore of the Gulf of Finland, by the Baltic Sea. The population of the city of Helsinki is 579,016 (30 June 2009), making it the most populous municipality in Finland by a wide margin. The foreign-born population stands at around 10%. Helsinki, along with the neighbouring cities of Vantaa (Vanda), Espoo (Esbo), and Kauniainen (Grankulla), constitutes what is known as the capital region, with over 1,000,000 inhabitants. The Greater Helsinki area contains 12 municipalities and has a population of over 1,300,000