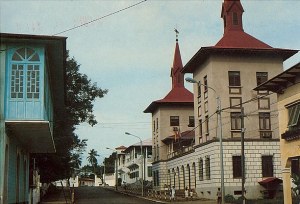 A postcard from Malabo

Malabo is the capital of Equatorial Guinea, located on the northern coast of Bioko Island (formerly Fernando Pó) on the rim of a sunken volcano.  The city was first founded by the British in 1827, who leased the island from Spain during the colonial period. Named Port Clarence, it was used as a naval station in the effort to suppress the slave trade. Many newly freed slaves were also settled there, prior to the establishment of Liberia as a colony for freed slaves.