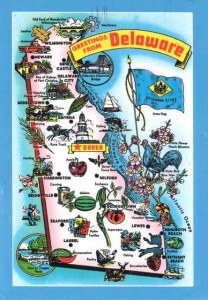 A postpostcard from Middletown, DE (Mindy)

About this postcard
The state was named after the Delaware River, which in turn derived its name from Thomas West, 3rd Baron De La Warr (1577–1618) who was the ruling governor of the Colony of Virginia at the time Europeans first explored the river. The Delaware Indians, a name used by Europeans for Lenape people indigenous to the Delaware Valley, also derive their name from the same source. The surname de La Warr comes from Sussex and is of Anglo-Norman origin. It came probably from a Norman lieu-dit La Guerre. This toponymic could derive from the Latin word ager, from the Breton gwern or from the Late Latin varectum (fallow).