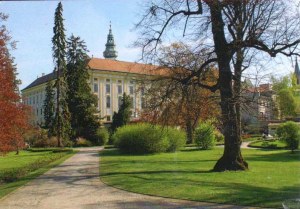 A postcard from Kroměříž (Emil)

About this postcard
The Kroměříž Castle in Kroměříž, Czech Republic, used to be the principal residence of the bishops and (from 1777) archbishops of Olomouc. The first residence on the site was founded by bishop Stanislas Thurzo in 1497. The building was in a Late Gothic style, with a modicum of Renaissance detail. During the Thirty Years' War, the castle was sacked by the Swedish army (1643). UNESCO listed the gardens and palace among the World Heritage Sites in 1998. As the nomination dossier explains, "the castle is a good but not outstanding example of a type of aristocratic or princely residence that has survived widely in Europe. The Pleasure Garden, by contrast, is a very rare and largely intact example of a Baroque garden"