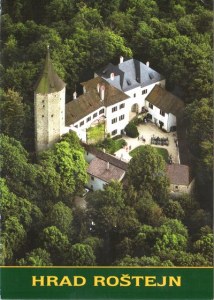 A postcard from Kolin (Jana)

The Roštejn castle is situated on the hill in the Jihlavské Vrchy (Jihlava Hillycountry) about 9 km north of the townTelč. The Gothic castle was built in the middle of the 14th century. At the end of the 16th century it was rebuilt into the Renaissance hunters' residence. The game park was founded around the castle in the second half of the 16th century (it was closed in 1902 and it is a reserve now). The most important owner were the Lords of Hradec and the Lechtensteins.