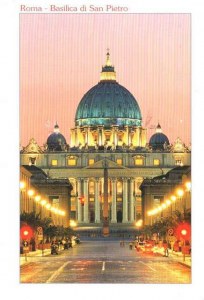 A postcard from Dobris (Alena)

Czech Republic. In my mailbox on February 28th 2020

About this postcard
St. Peter's Square (Italian: Piazza San Pietro) is a large plaza located directly in front of St. Peter's Basilica in the Vatican City, the papal enclave inside Rome, directly west of the neighbourhood or rione of Borgo. Both the square and the basilica are named after Saint Peter, an apostle of Jesus considered by Catholics to be the first Pope. At the centre of the square is an ancient Egyptian obelisk, erected at the current site in 1586. Gian Lorenzo Bernini designed the square almost 100 years later, including the massive Doric colonnades, four columns deep, which embrace visitors in "the maternal arms of Mother Church". A granite fountain constructed by Bernini in 1675 matches another fountain designed by Carlo Maderno in 1613.