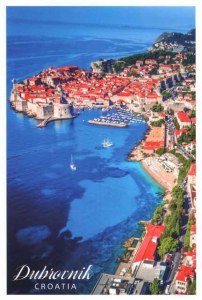 A postcard from Zagreb (Alex and Marie)

About this postcard
Dubrovnik is a Croatian city on the Adriatic Sea, in the region of Dalmatia. In 1979, the city of Dubrovnik joined the UNESCO list of World Heritage Sites. The current name was officially adopted in 1918 after the fall of the Austro-Hungarian Empire, but was in use from the Middle Ages. It is also referred to as Dubrovnik in the Charter of Ban Kulin in 1189. See also: Other names of Dubrovnik. The name is from dubrava, which means "oak grove". Dub in the Croatian language means "oak".