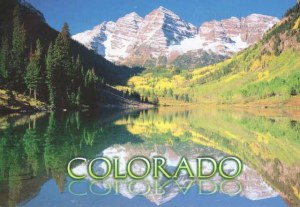 A postcard from Denver, CO (Melanie)

About this postcard
The Maroon Bells are two peaks in the Elk Mountains, Maroon Peak and North Maroon Peak, separated by about a third of a mile. The mountains are on the border between Pitkin County and Gunnison County, Colorado, United States, about 12 miles southwest of Aspen. Both peaks are fourteeners. Maroon Peak, at 14,163 feet (4317.0 m), is the 27th highest peak in Colorado. North Maroon Peak, at 14,019 feet (4273.0 m), is the 50th highest. The view of the Maroon Bells to the southwest from the Maroon Creek valley is commonly photographed. The peaks are located in the Maroon Bells-Snowmass Wilderness of White River National Forest. A US Forest Service sign on the access trail refers to these mountains as "The Deadly Bells" and warns would-be climbers of "downsloping, loose, rotten and unstable" rock that "kills without warning". Unlike other mountains in the Rockies that are composed of granite and limestone, the Bells are composed of metamorphic sedimentary mudstone that has hardened into rock over millions of years. Mudstone is weak and fractures readily, giving rise to dangerously loose rock along almost any route.