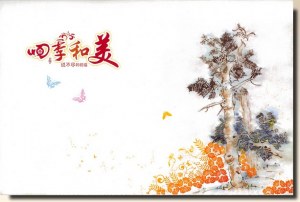 A postcard from Changsha (Yuuko)

Changsha is the capital city of Hunan, a province of south-central China, located on the lower reaches of Xiang river, a branch of the Yangtze River. Changsha was important from the time of the Qin dynasty. Changsha was an important commercial city, and its population increased greatly. Under the Qing dynasty, from 1664, it was the capital of Hunan province, and it was a major rice market. It was besieged during the Taiping Rebellion but never fell. Changsha was the site of Mao Zedong's conversion to communism. It was the scene of major battles in the Sino-Japanese War of 1937-45 and was briefly occupied by the Japanese. Rebuilt since 1949, the city is now a major port and a commercial and industrial center [wikipedia].