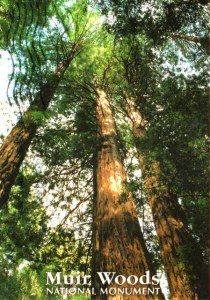 A postcard from San Francisco, CA (Cécile, Fred and Flo)

About this postcard
Muir Woods National Monument is a unit of the National Park Service on Mount Tamalpais near the Pacific coast, in southwestern Marin County, California. It is part of the Golden Gate National Recreation Area, and is 12 miles (19 km) north of San Francisco. It protects 554 acres (224 ha),of which 240 acres (97 ha) are old growth coast redwood (Sequoia sempervirens) forests, one of a few such stands remaining in the San Francisco Bay Area. One hundred and fifty million years ago ancestors of redwood and sequoia trees grew throughout the United States. Today, the Sequoia sempervirens can be found only in a narrow, cool coastal belt from Monterey, California, in the south to Oregon in the north. Before the logging industry came to California, there were an estimated 2 million acres (8,000 km2) of old growth forest containing redwoods growing in a narrow strip along the coast.