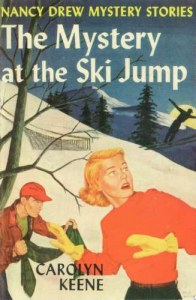 A postcard from Mammoth Lakes (Mia)

Nancy Drew is a fictional character in a mystery fiction series created by publisher Edward Stratemeyer. The character first appeared in 1930; the books have been ghostwritten by a number of authors and are published under the collective pseudonym Carolyn Keene. Over the decades the character has evolved in response to changes in US culture and tastes. The books were extensively revised, beginning in 1959, largely to eliminate racist stereotypes, with arguable success.