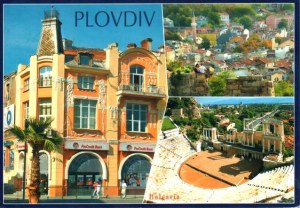 A postcard from Plovdiv (Faustine, Ninon, Léonie, Céline and Laurent)

About this postcard
Plovdiv has evidence of habitation since the 6th millennium BC. In the 12th century BC the village evolved into a real town populated by Thracians ranking it among world's oldest cities. Plovdiv was known in the West for most of its recorded history by the name Philippopolis. The city was originally a Thracian settlement, later being invaded by Persians, Greeks, Celts, Romans, Goths, Huns, Bulgarians, Slav-Vikings, Crusaders and Turks.