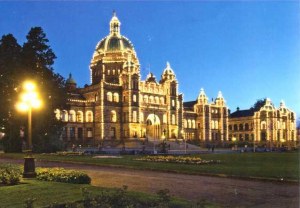 A postcard from Victoria (Kristin)

About this postcard
The British Columbia Parliament Buildings are located in Victoria, British Columbia, Canada and are home to the Legislative Assembly of British Columbia. The Speaker and the Sergeant-At-Arms are amongst those responsible for the legislative precinct, which by statute include the Parliament Buildings and grounds. The Neo-baroque buildings face north on Belleville street facing the Inner Harbour and diagonally across from The Empress Hotel. A statue of Queen Victoria stands on the front lawn as well a statue of a soldier to commemorate the province's World War I, World War II and Korean War dead. Atop the central dome is a gold-covered statue of Captain George Vancouver. Free guided tours of the facility are offered year-round.