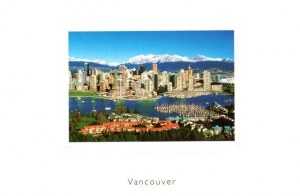 A postcard from Vancouver (Sarah)

About this postcard
False Creek is a short inlet in the heart of Vancouver. It separates downtown from the rest of the city. It was named by George Henry Richards during his Hydrographic survey of 1856-63. Science World is located at its eastern end, with the Granville, Cambie, and the Burrard (which is furthest west) Street bridges crossing False Creek. The Canada Line tunnel crosses underneath False Creek just west of the Cambie Bridge. It is one of the four major bodies of water bordering Vancouver along with English Bay, Burrard Inlet and the Fraser River. In 1986 it was the location of the Expo 86 World's Fair.