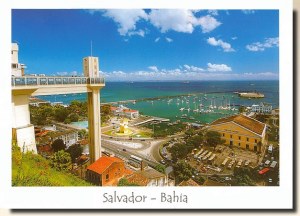 Salvador de Bahia is a city on the northeast coast of Brazil and the capital of the Northeastern Brazilian state of Bahia. Salvador is also known as Brazil's capital of happiness due to its easygoing population and countless popular outdoor parties, including its street carnival. The first colonial capital of Brazil, the city is one of the oldest in the country and in the New World; for a long time, it was also known as Bahia, and appears under that name (or as Salvador da Bahia, Salvador of Bahia so as to differentiate it from other Brazilian cities of the same name) on many maps and books from before the mid-20th century. Salvador is the third most populous Brazilian city, after Sao Paulo and Rio de Janeiro, and it is the ninth most populous city in Latin America, after Mexico City, Sao Paulo, Buenos Aires, Lima, Bogotà¡, Rio de Janeiro, Santiago and Caracas.