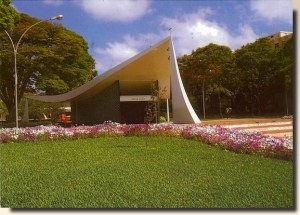 A postcard from Brasilia (Claudinei)

Brasà­lia is the capital of Brazil. The city and its District are located in the Central-West region of the country, along a plateau known as Planalto Central. It has a population of about 2,557,000 (3,599,000 in the metropolitan area) as of the 2008 IBGE estimate, making it the fourth largest city in Brazil, ahead of Belo Horizonte and Fortaleza. However, as a metropolitan area, it ranks lower at sixth. It is listed as a World Heritage Site by UNESCO. Brasà­lia is home of 91 foreign embassies.