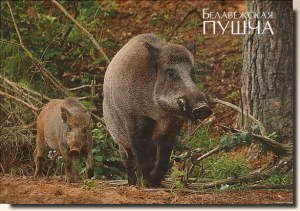 A postcard from Minsk (Fyedor)

Wild boar (Sus scrofa) is a species of pig, including at least 16 subspecies, and part of the biological family Suidae. It is the wild ancestor of the domestic pig, an animal with which it freely hybridises. Wild boar are native across much of Northern and Central Europe, the Mediterranean Region (including North Africa's Atlas Mountains) and much of Asia as far south as Indonesia. Populations have also been artificially introduced in some parts of the world, most notably the Americas and Australasia; principally for hunting. Elsewhere, populations have also become established after escapes of wild boar from captivity.