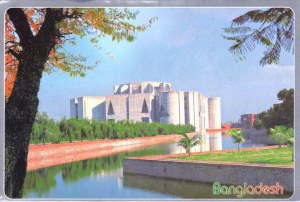 A postcard from Dhaka (Md. IMRAN)

The Jatiyo Sangshad ("National Parliament"), often referred to simply as the Sangshad or JS and also known as the House of the Nation, is the supreme legislative body of Bangladesh. The current parliament of Bangladesh contains 350 seats, including 50 seats reserved for women, which are apportioned on elected party position in the parliament. Elected occupants are called Members of Parliament or MP. The 10th National Parliamentary Election was held on January 5, 2014 and under normal conditions, elections are called every five years.