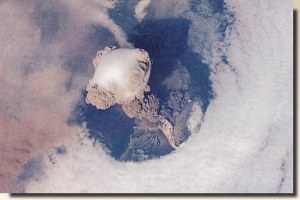 A set of postcards from Melbourne (Reynardo 1/3)

Sarychev Peak  is a stratovolcano covering almost the entirety of Matua Island in the Kuril Islands, Russia. It is a young, highly symmetrical stratovolcanic cone. On 12 June 2009, the volcano erupted, sending out ash plumes. As the volcano is near some of the main air routes between East Asia and North America, there has been some disruption to air traffic. During the eruption, the International Space Station passed overhead and astronauts were able to photograph the event. A hole in the overhead clouds, possibly caused by the shock wave from the explosion, allowed a clear view of the plume and pyroclastic flow down the sides of the mountain. A cap-like pileus cloud is visible atop the rising column.