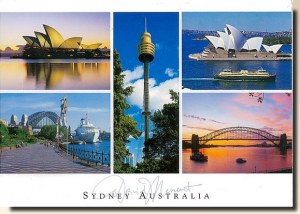 A postcard from Sidney (Perrine)

Sydney is the largest and most populous city in Australia and the state capital of New South Wales. The site of the first British colony in Australia, Sydney was established in 1788 at Sydney Cove by Arthur Phillip, commodore of the First Fleet as a penal colony. The city is built on hills surrounding Port Jackson which is commonly known as Sydney Harbour, where the iconic Sydney Opera House and the Harbour Bridge feature prominently. The hinterland of the metropolitan area is surrounded by national parks, and the coastal regions feature many bays, rivers, inlets and beaches including the famous Bondi Beach. Within the city are many notable parks, including Hyde Park and the Royal Botanical Gardens.