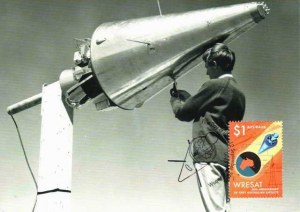 A postcard from Sidney (Dale)

About this postcard
WRESAT (abbreviation for: Weapons Research Establishment Satellite) was the name of the first Australian satellite. It was named after its designer. WRESAT was launched on 29 November 1967 using a modified American Redstone rocket with two upper stages known as a Sparta from the Woomera Test Range in South Australia. The Sparta (left over from the joint Australian-US-UK Sparta program), was donated by the United States. The launch made Australia the seventh nation to have an Earth satellite launched, and the third nation to launch one from its own territory, after the Soviet Union and the United States (the UK, Canada and Italy's satellites were also launched on American rockets unlike the French Astérix, which launched on an indigenous rocket out of Algeria.