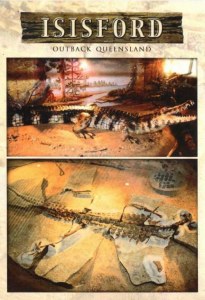 A postcard from Oakey (Kathleen) 1/5

About this postcard
Isisfordia is an extinct genus of crocodyliform closely related to crocodilians that lived in Australia during the Middle Cretaceous (Albian–Cenomanian). The type species, I. duncani. (named after the discoverer; former Deputy Mayor of Isisford, Ian Duncan) was discovered in the Winton Formation in Isisford, Queensland, Australia in the mid-1990s. Most of the animal was discovered, with the exception of the front portion of the skull. On a later expedition to the location, paleontologists discovered a complete skull which differed from the original specimen in size only. A second species I. molnari was named in 2019 from a braincase found in the Griman Creek Formation near Lightning Ridge, and the nominal species Crocodylus (Bottosaurus) selaslophensis Etheridge, 1917, based on a maxillary fragment from the same unit, was referred to I. molnari.[3] Later, however, Hart (2020) noted that the selaslophensis holotype doesn't overlap with that of AM F125553, so he retained Etheridge's species as a distinct species, I. selaslophensis, even though he raised the possibility that molnari could be synonymous with selaslophensis.