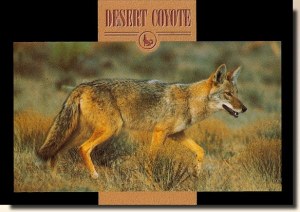 The coyote, also known as the American jackal or the prairie wolf, is a species of canine found throughout North and Central America, ranging from Panama in the south, north through Mexico, the United States and Canada. It occurs as far north as Alaska and all but the northernmost portions of Canada. There are currently 19 recognized subspecies, with 16 in Canada, Mexico and the United States, and 3 in Central America. Unlike its cousin the gray wolf, which is Eurasian in origin, evolutionary theory suggests the coyote evolved in North America during the Pleistocene epoch 1.81 million years ago alongside the Dire Wolf. Unlike the wolf, the coyote's range has expanded in the wake of human civilization, and coyotes readily reproduce in metropolitan areas.