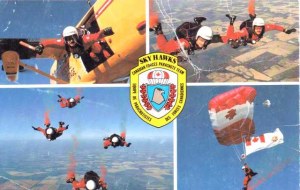 A postcard from Edmonton (Fr.)

About this postcard
The SkyHawks are the Canadian Forces Parachute Demonstration Team. Based at CFB Trenton in Trenton, Ontario, they are a sub-unit of the Canadian Army Advanced Warfare Centre (CAAWC). The team consists of both permanent members and temporary members from the Regular and Reserve Forces. They act as ambassadors for the Canadian Forces at special events, airshows and events. They are easily recognizable because their parachutes resemble the Canadian flag. The team was established in 1971 with Major John Hasek as its first commander. The SkyHawks have appeared in more than 4,200 shows, performing for over 75 million spectators. Other than Canada and the United States, they have also made appearances around the world including Japan, France and Australia.