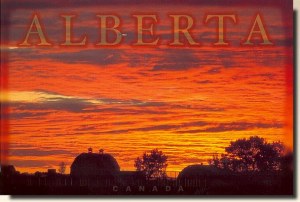 A postcard from Alberta (Murray)

Alberta is a province located in the western part of Canada. It and neighbouring Saskatchewan were established as provinces on September 1, 1905. Alberta is located in western Canada, bounded by the provinces of British Columbia to the west and Saskatchewan to the east, the Northwest Territories to the north, and the U.S. state of Montana to the south. Alberta is one of three Canadian provinces and territories to border only a single U.S. state and is also one of only two provinces that are landlocked.